More audacious high-altitude architecture: could it be the thinner air inspires investment as well as design? What’s certain is that Courmayeur has a new attraction, as much a feat of engineering as a breathtaking experience: the Skyway. Inaugurated last summer, it’s a futuristic cableway that takes visitors, in less than 20 minutes, from the valley station at Entrèves up the slopes of Mont Blanc to a dizzying height of 3,466 metres above sea level. Practically onto the roof of the Europe, a place previously accessible only to such practised thrill-seekers as come equipped with ropes and harnesses, carabiners, crampons and what have you. Four years in the making by a consortium of variously specialised companies and studios called Cordée Mont Blanc, its design was entrusted Carlo Cillara Rossi, Genoese architect experienced in cable transport systems and, just as important, a mountain lover, climber and crack skier himself. For there’s more to the Mont Blanc Skyway than meets the eye: there’s a concept, or even several.

Criterion #1, happily the norm in this day and age and nowhere more fittingly than a pristine mountain top, was environmental. Materials – alluminium, steel and glass as well as wood – and technology combine in all three stations to provide stunning views and a sense of being outdoors while coping with and insulating from an extreme climate. Fitted with photovoltaic and heat pump systems too, the buildings are almost energy self-sufficient. Criterion #2 was … also environmental but a matter of visual impact, so utterly different designs nonetheless reflect aspects of the snowy, icy, rocky mountain landscape.

Pontal d’Entrèves, the valley station, sports a soothing, gently curving white roof that sweeps down to ground level on its west side to cover an underground parking area. It also houses the ticket office and several public spaces including a glass-walled bar. Pavillon du Mont Fréty is a spectacular half-way house and the true visitors’ centre: multi-layered rounded planes and glazed walls contain shopping areas, a cinema, restaurants and cafés. The final station, the Skyway summit, is something else: free-form angular volumes with cantilevered terraces resemble jagged peaks or quartz crystals at Punta Helbronner, with its stunning 360-degree view of the summit of Mont Blanc, the Dent du Géant, the Grandes Jorasses glacier and lovely Vallée Blanche. 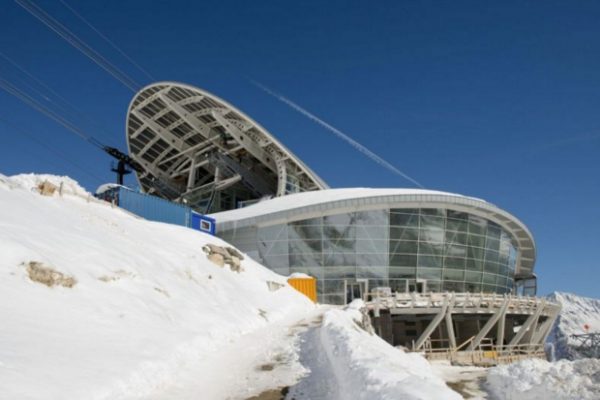