Now here’s one of those secret addresses that really will make the difference, particularly if you’re weary of the great and glossy chain hotels. This one’s in Milan, nice and central in Zona Garibaldi: a sublimely appointed B&B on the first floor of a late 19th-century palazzo, recently and handsomely renovated, run by the owners. LaFavia Four Rooms boasts a big terrace and a veranda and just the 4 design rooms, each with its own distinctive style in which contemporary meets retro and has no fear of busy patterns applied in moderation or of upcyled furnishings. That holds for the respective bathrooms too. Two of the rooms also have a kitchenette and open onto a private terrace area.

The personal touch in the case of LaFavia Four Rooms is that of Fabio and Marco, along with the architects, the art designer and many other creative friends who worked on the project, all duly credited on the website. A cherished project, the fruit of lengthy wanderings around the world and the ideas, objectives and dreams that matured along the way, to share concepts and qualities they admire with other wayfarers back in their hometown. A few of those concepts are evident right away: exquisite hospitality; no tvs but lots of books; a couple of bicycles for eco-sightseeing; purified rather than bottled water; and organic, mostly zero-miles produce for breakfast. For the rest, such as planting trees in Costa Rica, meet Fabio and Marco. 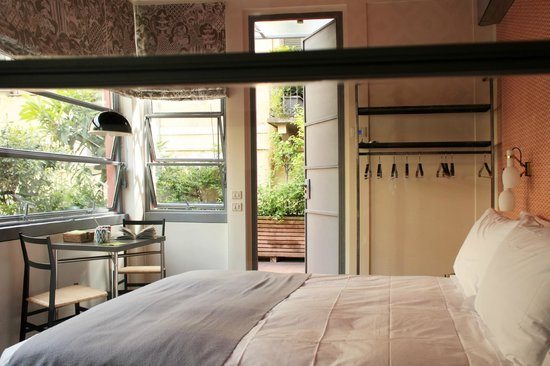