Modena has a new museum. No ordinary museum on two counts: firstly because it’s entirely dedicated to Enzo Ferrari (1898 – 1988) and the mythical sports car company he founded: secondly, because it’s a huge, dramatic, purpose-built exhibition space, wholly inspired by the motor-racing theme.

London studio Future Systems, in the person of its founder, the late Czech architect Jan Kaplický, was commissioned in 2004 to design the new structure by the Fondazione Casa Natale Enzo Ferrari. Following Kaplický’s death in early 2009, completion fell to Shiro Studio under the direction of former Future Systems associate Andrea Morgante.

Part of the museum is the early 19th-century complex consisting of the house where Enzo Ferrari was born and its adjoining workshop, renovated by Andrea Morgante to incorporate a 40-metre gallery space with contemporary exhibition displays illustrating the life and passion of the motor racing giant.

The glass façade of the dazzling new building curves around this. Its sunflower-yellow aluminium roof is bowed like the bodywork of a racing model, with two rows of colossal incisions just like the air intake vents on a car bonnet. Yellow, not red? Yep, in spite of all the iconic red Ferraris around, it seems that yellow is the corporate colour (as the background to the prancing horse logo), and the historic colour of Modena.

Cars are protagonists in the 5000 square metres of stunning, white exhibition-scape, displayed in all their glory on specially-designed raised platforms. Visitors follow a sloping route around the open-space temple of motor-racing history, from ground floor to basement level, to revere up to 21 fabled vehicles. The very first exhibition is entitled The Origins of the Myth, and naturally features early Ferraris but also Alfa Romeo and Maserati models Enzo Ferrari raced before he designed and built his own fast and furious creations.

The structure includes a bookshop and café as well as teaching and conference areas. A trifle paradoxically, perhaps, the Ferrari theme museum is the first in Italy to be heated and cooled using geothermal energy; the nod to sustainability also includes photovoltaic systems and water recycling technology. 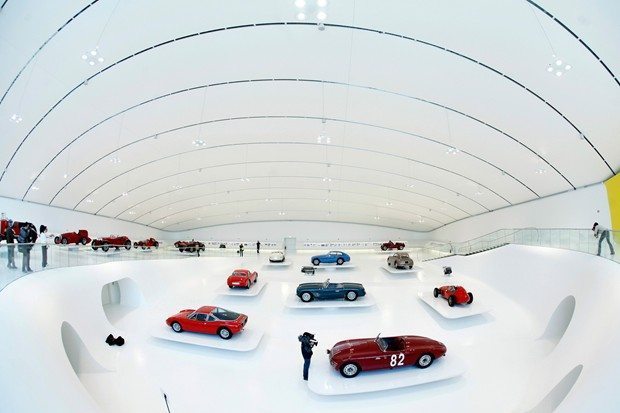 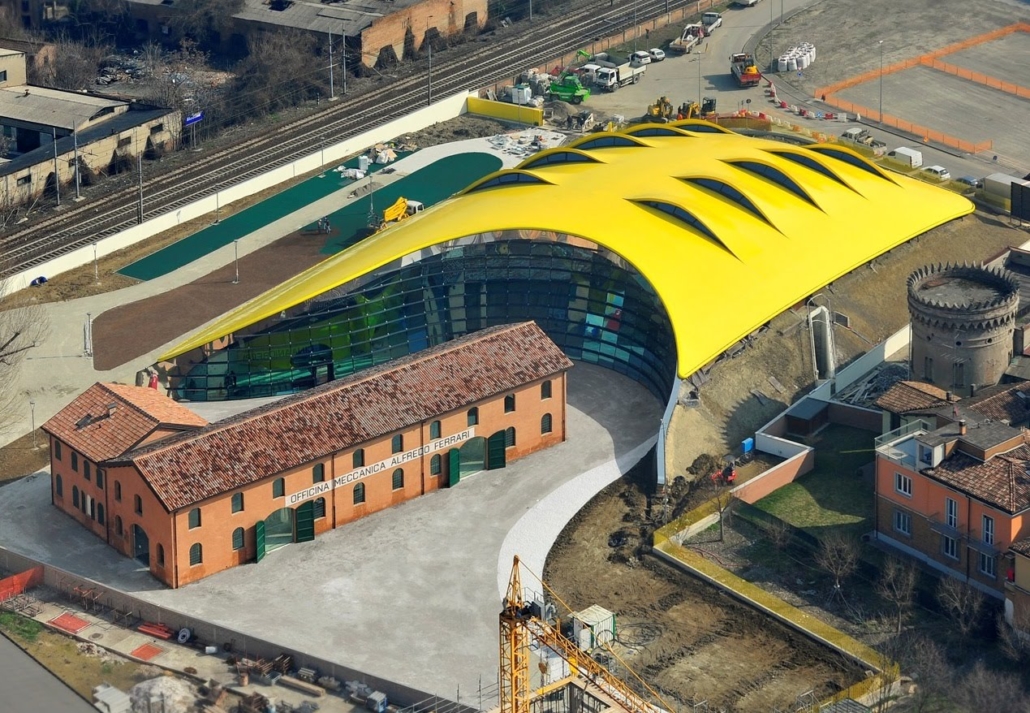