For a surprising alternative to Romeing around the crowded city centre, head out to the Garbatella, a residential quarter built on the southern outskirts of the city in the 1920s and ’30s. Part of a plan to link Rome to the sea at Ostia via a navigable canal parallel to the Tiber, the Garbatella was to accomodate port workers and their families. The canal was never dug, but housing development began apace under the illuminated guidance of Gustavo Giovannoni and Innocenzo Sabbatini, and subsequently Massimo Piacentini among others.

They were inspired by Ebenezer Howard’s socialist utopian concept ofGarden Cities, and planned detached houses or small blocks built around a common courtyard and garden where families could socialize, share resources and grow their own vegetables. The idea was to soften the rough edges of city life and recreate, to some extent, the virtues of the rural villages so many of the workers came from. Their distinctive architectural style was known as ‘barochetto‘, similar to Baroque in its moulding and decorative animal and botanical motifs.

Only a few years later, under the Fascist government, there was a change of direction in urban planning. Construction continued in the Garbatella, but with larger blocks of smaller flats and fewer green areas, culminating in the three ‘sub-urban hotels’  as they were called at the time, blocks containing tiny temporary dwellings with a minute kitchen and toilet, served by communal baths down the road.

Still, the area has retained a distinctive, people-friendly character. Hidden behind the buildings are sub-tropical gardens and stunning courtyards, lush communal spaces dotted with palms and banana and orange trees, usually accessible. The Garbatella is now known for street art too, and the revival of its vegetable gardens. It has a more exotic feel than most of the capital, and a decidedly laid-back atmosphere.

An injection of new life came with the reopening of the TeatroPalladium, which has an interesting calendar of events all year round organisedby the Romaeuropa Foundation in collaboration with Roma Tre University.

And some lovely new restaurants and bars are cropping up alongside those that have been there for generations, most of which boast a radical-chic flavour. My favourite is the Ristoro degli Angeli, Via Luigi Orlando 2,  a two-roomed eatery with plain, simple food, vintage furnishings and an eccentric green-haired hostess.

Thanks to Luca Morandi for the photograph. 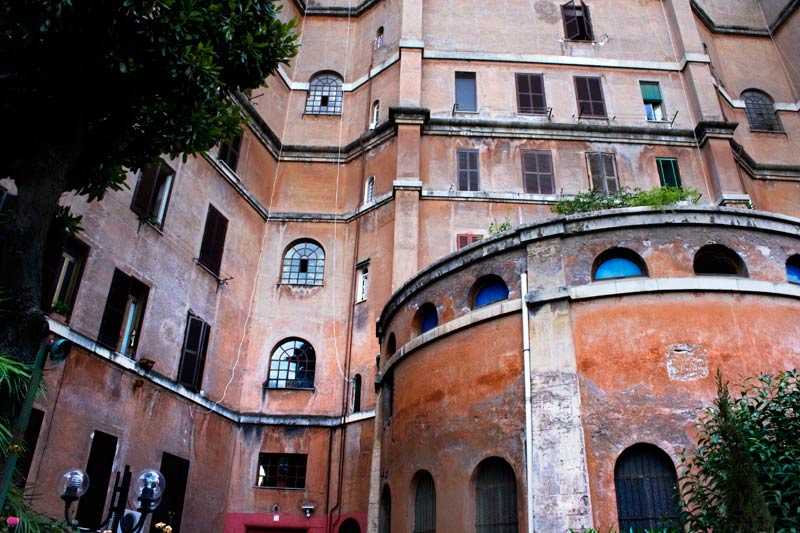