Villa d’Adda, a pleasant hill town around 15 kilometres west of Bergamo, has fewer than 5000 inhabitants but a monumental public library – or at least the building ready to house it. Even before the new library, it could justly lay claim to one of the most imposing mini-fortresses in the province, known as Torre del Borgo, bang in the centre of the old town. Now they are one and the same, thanks to some worthy municipal planning and an audacious renovation project by CN10, the Bergamo architecture studio headed by Gianluca Gelmini.

The little castle, hardly towering but nonetheless taller than it is broad, was in any case in dire need of some serious maintenance. The plans by CN10 necessarily started with the most basic structural consolidation and proceeded with restoration of stonework, letting in a little more light than was wise in a medieval stronhold, installation of systems connecting the various floors (five in all) and volumes, and generally adapting the keep to its new public function while preserving its historical form as nearly as possible. This involved the addition of a brand new wing, a small, angular addition of three floors set back from the main façade and copper-clad for contrast, to house restrooms and services. It’s connected to the central volume via the above-mentioned system of stairways, gangways and ramps, all internal, all in iron. This part of the project was completed last year. So far so good. What remains to be done is the makeover of the little square out front, Piazza del Borgo. Gianluca Gelmini’s project includes new paving and a covered area extending towards the street. 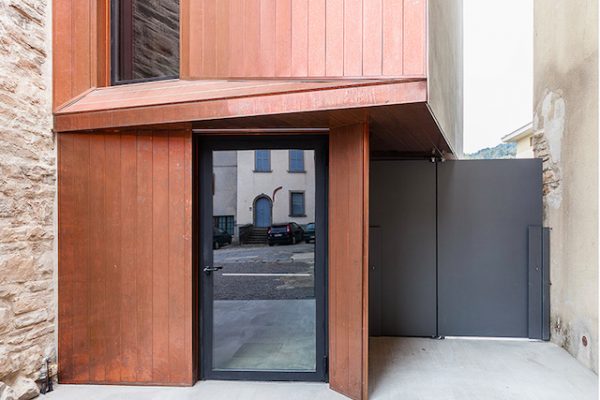 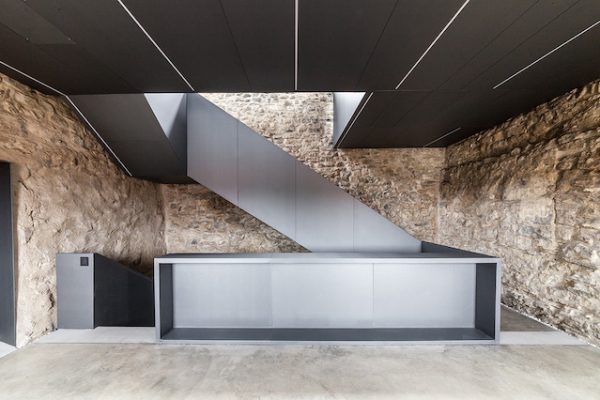